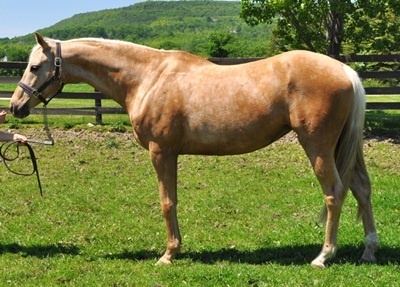 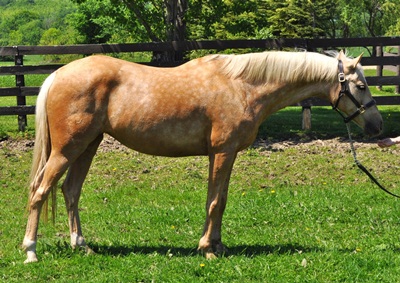 Elita is a beautiful imported British Riding Pony mare who was bred by the famous Small-Land Stud in the UK. Her sire, *Cusop Fingerprint (now deceased), has been a very successful sire for the Cusop Stud. He has sired ponies like Kavanaghs Dream - Pony of the Year in 2000, Cusop Diamond - Champion Riding Pony at The Royal Melbourne, Australia and Cusop Dimension - Supreme Champion at the Royal Welsh Show and National Pony Show as well as being an extremely successful sire himself. Fingerprint also showed as a young pony, winning titles such as Supreme Champion of Show at Ponies of Britain. He was known for his unique colour and child friendly temperament that he passed on to his foals.

Elita's dam is *Small-Land Gazelle by Small-Land Mambrino. In fact, Elita is full sister to the Small-Land Stud's retained stallion "Small-Land Maytino." Maytino has sired many successful riding pony foals such as Small-Land Rialto who was Reserve Champion at Horse of the Year Show 2005 and Westhill Vanity Fair who was Supreme Champion Show Pony BSPS Champs 2003 and placed at HOYS 2004. Small-Land Martello, one of Prue Richardson's wonderful stallions, is another well-known son of Small-Land Maytino. Elita is Maytino's only full sibling in the world. She also has the added bonus of being a wonderful palomino colour.

You will not find a better riding pony pedigree anywhere, and there will never be another mare like Elita. She has three gorgeous gaits, a loveable temperament, outstanding conformation and a sweet face. She has a long and low way of going which is perfect for hunter foals. Great hunter movement that she will surely pass on to her foals. Elita has a wonderful 2010 colt by Downland Whimsical - Rockwood's Goldfinger who inherited the best qualities from both parents. We are so honoured to have a mare of this caliber on our farm.