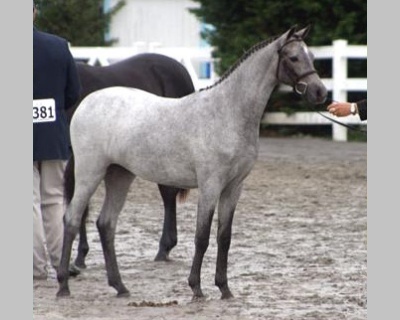 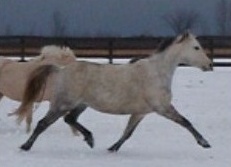 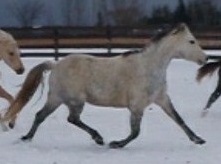 Taryn is a big moving medium pony mare. Though she is a smaller medium, she moves like a large. She got her registered name because of her outstanding movement as a foal, that has only gotten better as she matures. Her sire is known all over America for producing quality hunter pony champions, and Taryn is no exception. Taryn's dam is one of the great Snow Pony mares. Taryn has shown that proven pedigree equals success by collecting many ribbons at the prestigious Devon Show as a yearling and 2 year old (photo right). She has exceptional hunter movement and a curious personality. She is full sister to 2003 USA Zone Champion Pony - Kodak Moment. Apart from her fantastic bloodlines and Devon ribbons, Taryn has already produced a quality foal by *Springbourne Boy Blue. Thank you to Prue Richardson of Northwind Farm on the opportunity to breed this mare.